Goal: To quantify the amount of subsurface oil to prioritize shorelines for different remediation options

Methods and Products:  Oil from the 1989 Exxon Valdez oil spill of 10.8 million gallons of Alaska North Slope crude oil has persisted along shorelines for 20 years, as both surface and subsurface oil residues. Surface and subsurface oil may be causing on-going exposure and potential harm to living organisms, wilderness areas, recreational activities, and subsistence users in Prince William Sound and the Gulf of Alaska. 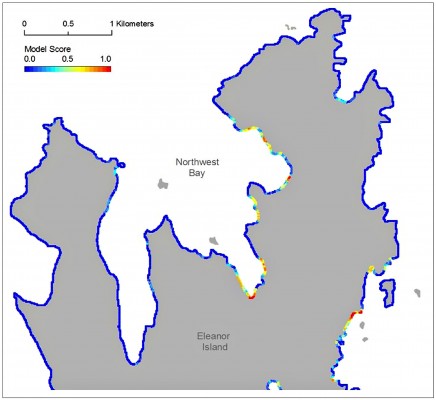 RPI developed a series of spatial models based on data collected at 314 shoreline segments that were surveyed between 2001 and 2008. These data allowed us to identify a number of geomorphologic and hydrologic factors that have contributed to the persistence of subsurface oil two decades after the spill.

Because detailed data layers for each of these factors are not available, the model used existing data sets as surrogates to represent these factors, such as distance to a stream mouth or shoreline convexity. While the linkages between the data used and the physical phenomena that drive persistence are not clearly understood in all cases, the performance of these models is remarkably good. Just as a coastal geomorphologist would integrate all of the factors when evaluating a shoreline segment for the likelihood of having subsurface oil, the model simultaneously evaluates all identified variables to make a similar assessment in a rigorous, unbiased manner. The model results indicate there are a limited but significant number of as-yet unsurveyed locations in the study area that are likely to harbor lingering subsurface oil. Furthermore, the model results may be used to quantitatively prioritize shorelines for investigation with known uncertainty.

Using different screening criteria, the model was used to identify the shoreline lengths, number of sites, and specific locations where different methods would be considered to speed the rates of natural removal.